The importance of AEDs at GP clinics 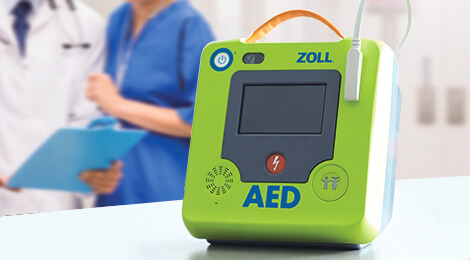 The study, published in the Medical Journal of Australia, calls for all GP clinics to be fitted with a defibrillator.

The study, led by PhD Scholar Brian Haskins, from the Monash Prehospital Emergency Care Centre of Research Excellence and the Department of Paramedicine, compared the frequency and outcomes of cardiac arrests in general practice clinics with those of paramedic-witnessed cardiac arrests.

It found that people who had cardiac arrests in GP clinics and were defibrillated by clinic staff with automated external defibrillators (AEDs) were twice as likely to survive as patients who were first defibrillated by arriving paramedics.

Although clinic administrative staff must undertake cardiopulmonary resuscitation training every three years, accreditation by the Royal Australian College of General Practitioners does not require general practices to have onsite AEDs.

The study looked at patients with non-traumatic cardiac arrests whom emergency medical services staff attempted to resuscitate, using Victorian Ambulance Cardiac Arrest Registry data, for the two decades from 2000 to 2019.

Of the 6363 cases of cardiac arrest identified, 216 occurred in general practice clinics and 6147 were witnessed by paramedics.

The study found that the proportion of patients presenting with initial shockable rhythms was larger in the clinic and the proportion of general practice clinic cases in which defibrillation was provided in the clinic increased from 5 per cent in the early part of the study (2000–2003) to 33 per cent in 2016–2019, “indicating an uptake in automated external defibrillators in GP surgeries,” Mr Haskins said.

“Our study has found that emergency medical services should be alerted as soon as possible after people experience heart attack warning symptoms. Automated external defibrillators should be standard equipment in general practice clinics, enabling prompt defibrillation, which may substantially reduce the risk of death for people in cardiac arrest,” Mr Haskins said.