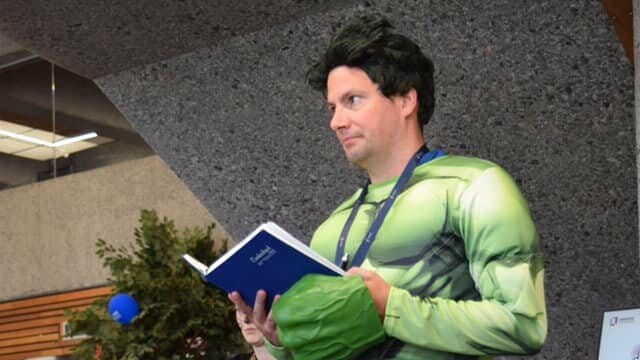 This article was originally posted on the ABC News. To see the original article CLICK HERE

When Tasmanian library worker Tyron Waugh donned his Hulk costume for Book Week, he had no idea that by the end of the day, he would be considered a superhero in real life too.

Last week’s Book Week celebrations were in full swing inside the Burnie Library when a medical drama began unfolding outside.

A man had suffered a cardiac arrest and Mr Waugh — in the guise of The Hulk — was one of those who performed CPR, saving the man’s life.

“It wasn’t really until afterwards and everything had settled down that the manager and I said can’t believe it happened on book week … and I was dressed as The Hulk,” he said.

Ambulance officer Ray Johnson said seeing The Hulk performing CPR on a patient in the street was “one of the more unusual things” he’d seen in his career.

“It definitely wasn’t something I’d seen before,” he said.

‘He’s pretty bad, he may need a defibrillator’

Mr Waugh usually works upstairs in the library but decided to head downstairs to check on staff there because the rest of the team was focused on running children’s activities for Book Week.

“Within probably about a minute or so someone ran in and said that a gentleman had collapsed on the street,” he said.

“Someone yelled out ‘he’s pretty bad, he may need a defibrillator’ … [I] grabbed the defibrillator and ran out there.

“When I got there a lady had started the CPR — without her it might have been different.”

Mr Waugh used the defibrillator to shock the patient and then CPR was continued until the ambulance arrived.

“Even when the ambulance arrived and took over I was sort of helping with the scene and getting some details off people,” Mr Waugh said.

“I suddenly thought, ‘Gee I should take off this outfit,’ and it was hot and then I realised that I didn’t have any pants on underneath so I couldn’t do it anyway.”

“So I had to stand there in the street and there were a lot of people driving past and looking and probably wondering why this guy was dressed as The Hulk.”

Mr Waugh has worked at the Burnie Library for the past three years.

Before that he had served in the Army, worked for the Antarctic Division, as a fish farm diver and as a lifeguard.

“It’s almost like I’ve been prepping for that moment most of my life,” Mr Waugh said.

And while the father-of-two can see why people are tying the superhero costume to his actions on the day, he is adamant the real hero is the woman who started the CPR.

“The girl that started that probably didn’t have near the training that I did but she still got in and had a go,” he said.

“I think that’s amazing. It’s probably even bigger for someone who hasn’t had the background that I have to get in there and give it a try because if people don’t do that then they have no hope.”

Ambulance officer Ray Johnson agreed the both Mr Waugh and the woman who had started the CPR were heroes who had saved the man’s life.

“If you look at the pre-hospital stats for cardiac arrest [survival], the stats are quite poor — so this gentleman is very lucky to be alive,” he said.

“Bystander CPR — whether it’s The Hulk, whether it’s somebody who thinks they’re going to hurt them, or somebody who is trained — is one of the most important things that people can do because without that compression circulating blood and oxygen, the patients almost have no chance.

“We try to get the message out there … it’s better to do something than nothing.”

Mr Waugh confesses he “has a bit of a thing for superheroes” and the incident has not put him off donning the costumes in the future.

“A few weeks before that we had a thing at the library called Burnie Reads and we’d dressed in characters for that and I dressed as Superman,” he said.

“And then it was only a few weeks later that we were dressing up again for Book Week and I went as The Hulk.

“I’m sure it won’t be too far away before I’m wearing another one … but I’m sure nothing like that will ever happen again.”